There have been a number of occasions in the past couple of weeks when I have heard others say, “I’ll give it a try 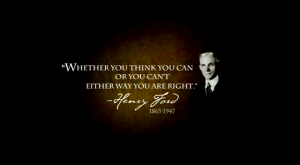 ”; or, “I’m trying to…”.   Now at one level, I as very aware that despite misgivings and uncertainty these individuals were attempting to do something that was outside their comfort zone.

However as I listened to them, I could hear the doubt in their voices and I know, that in saying that they were going to try, what they were really saying was that they did not have the belief that they could succeed, and they also wanted to  give themselves and easy opt out.

And then I found myself saying that I would try something…..

It was almost as if the very phrase had become contagious.   As I began to think about it, I was also very aware that at this time of year many youngsters take on new extra-curricular activities and many adults will “try out” evening classes and hobbies and other activities.

Now I have written and spoken many times in recent years about the importance of the words that we use when we are thinking about things and the impact that our thoughts have on our belief systems.

Think or a moment about the following two statements would impact on a young child learning to ride a bicycle.

“Go on give it a try, it doesn’t matter if you fall, you can get back up again”

“Go on I know that you will master this, we’ll stay at it together until you do”

Even reading these back I can see the far greater element of doubt in the first statement.  And this doubt is not helpful. In the words of Henry Ford

Whether you think you can or you can’t,

Either way you are right

And so my challenge to you this week is to start by being aware of just how often you, and those around you use the word try.  Take the opportunity, in your own self-talk and in your conversations with others to be clear, and use language that builds belief in achieving success.   Take “try” out of your vocabulary and replace it with “I will do”; “I will succeed” “What can I do to make this happen?”

Believe in the possible!